You are using an outdated browser.
Please upgrade your browser
and improve your visit to our site.
Skip Navigation 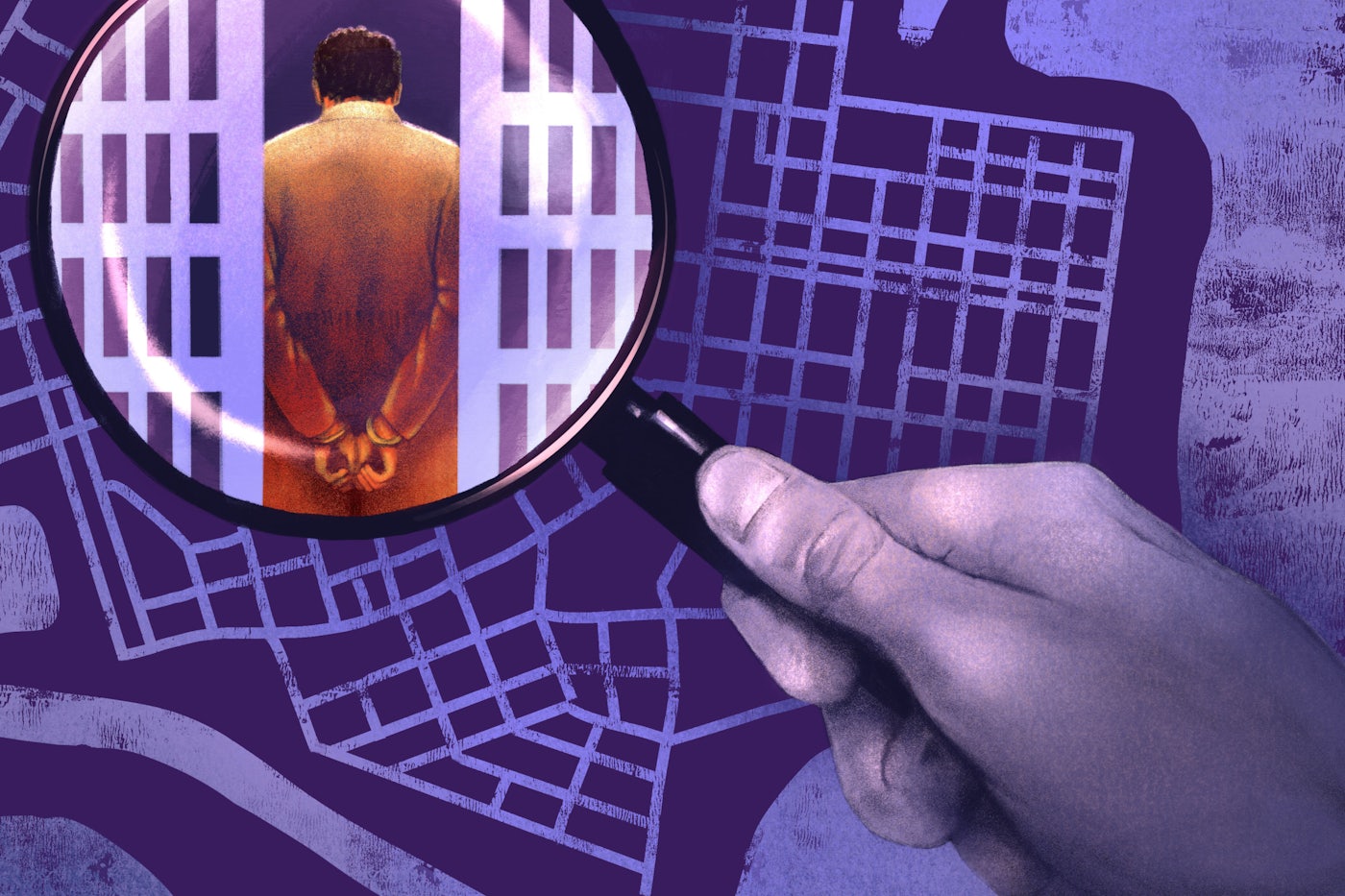 In 2008, a man named Danny Young received just two votes for his candidacy to the City Council in Anamosa, Iowa: one from his wife and one from his neighbor. Both were write-ins, but he still won handily. Young’s ward had the same number of constituents as any of the other wards in his city, but since 1,321 of his district’s 1,379 constituents were incarcerated at the Anamosa State Penitentiary and couldn’t vote, his 58 non-incarcerated constituents had about 25 times the representational power of their fellow residents.

When people become incarcerated, their state and local representation changes from their home district to their district of incarceration. But most elected officials don’t see themselves as also representing their incarcerated constituents; a study by researcher Taren Stinebrickner-Kauffman found that Indiana state legislators considered themselves more accountable to currently incarcerated former constituents than to those living in a prison in their district. When Young, the legislator from Anamosa, was asked in 2008 if he felt the people incarcerated in his district were also his constituents, he responded: “They don’t vote, so, I guess, not really.”

Across the country, the 2.3 million incarcerated Americans who have a current address at a prison or jail are also designated by the census as residents of the areas in which they are incarcerated rather than of their home districts, a population redistribution called prison gerrymandering.

The practice is distinct from partisan electoral gerrymandering, where districts are intentionally drawn to give one party a political advantage, but has similar effects: It can significantly impact political maps, particularly state house and senate districts. And when incarcerated people are counted in districts where they do not normally live and cannot vote, the results are a systemic redistribution of representation away from communities most impacted by mass incarceration to prison towns.

In Illinois, “Those incarcerated are primarily Black and brown and from Cook County,” Ryan Tolley, policy director at Change Illinois, which worked to end prison gerrymandering in Illinois, told me. “But most prisons are located outside of Cook County, primarily downstate, so when we go to redraw our political districts and they need to be divided up equally in population, those who are incarcerated are being counted downstate.”

Since the average length of incarceration is between two and three years, when incarcerated people return home, the population of their home district increases, diluting the power of each individual vote and giving communities most impacted by incarceration less representation in state and local government. At the same time, people living in districts with prisons see an inflation in voting and representative power as their district’s numbers are boosted by incarcerated people who, in most states, can’t vote.

“You definitely feel used, you feel exploited, disposable,” said Robert Saleem Holbrook, who learned of the practice while incarcerated at SCI Huntington in Central Pennsylvania. “The thing that really also resonated with us more than anything was that it decreased our political power. And having more political power can enable our community to address the political problems, social problems that are right in front of us. What we saw was prison gerrymandering was a part of the historical process of disenfranchising and marginalizing Black communities in the United States.”

“You’re not just punishing the incarcerated person by moving that representation, you’re punishing their family that still lives in the old neighborhood, you’re punishing the people who live down the street who now live in a district that is underrepresented,” said Rory Kramer, a researcher studying prison gerrymandering at Villanova University. “Everyone who lived near that person who is actually being harmed by prison gerrymandering.”

Though the census has counted incarcerated people at the site of their incarceration rather than at their homes in their communities since its inception, the practice has only started significantly impacting the count in recent decades, tied to the rise of mass incarceration in the United States.

For this reason, many scholars cite prison gerrymandering as a modern-day manifestation of the Three-Fifths Compromise, which counted enslaved African Americans as three-fifths of a person to inflate the electoral power of slavers and the districts they lived in, even though enslaved people had no power to vote.

“It shows you that they see their constituents as the guards, and not the people who are dying within the prison,” he explained. “It makes you vulnerable because legislators don’t want to enforce any accountability with the prison staff, who they regard as their constituents, rather than protect us because when we’re in their districts, we can’t vote.”

Like Holbrook, Atiba Kwesi is an advocate for ending prison gerrymandering in Pennsylvania. “I served 27 years in prison and when I was working on my case, I learned that counties would be bidding to get prisons built in their area,” Kwesi explained. “And when they listed the benefits that they will receive, one of the benefits was the amount of representation they would gain.”

Part of why the issue of prison gerrymandering has such an impact is due to where prisons are located and who is incarcerated in America. Since the 1980s, prisons have primarily been constructed in non-metro areas to take advantage of cheaper land prices and to ostensibly combat rural economic decline. Since most people who are incarcerated are Black and brown and from urban areas with heavier policing and criminalization, prison gerrymandering ends up primarily amplifying the power of white voices in suburban or rural areas at the expense of people of color’s voices in more urban areas.

“On a national scale, we’re talking about a major shift in political representation,” said Bertram. “Communities that are sending the most people to prisons are not getting as much in the way of direct assistance for housing, schools, health care, especially mental health and substance use treatment, that they would be if it was acknowledged in the redistricting process that these communities include a lot of people who are in prison.”

Tolley has seen the same issue in Illinois. “Lawmakers that are talking about issues like reducing recidivism and are working on those issues in the State House are the ones in the communities where these folks are returning to,” he said. “And when you limit their representation, you have less folks in Springfield that care about those issues.”

Representative Joanna McClinton currently represents Philadelphia in the Pennsylvania State House and her experience as a legislator has motivated her to champion the issue of ending prison gerrymandering in the state.

“A great deal of our constituent casework is for people who do not physically live in our district and are not counted in our districts,” said McClinton. “Legislative offices often serve as a ground zero for navigating the challenges that occur when someone is incarcerated. So day to day, representing a district that is predominantly Black and brown, I get incarcerated people contacting me who are very concerned about support for their family, support through this pandemic, connecting their loved ones to opportunities, finding out about job opportunities, approved housing because that’s a key factor for people getting out early.”

“Technically, you are represented by the person whose district you are incarcerated in, but in reality, your problem is probably about your home district and the other people who are writing on that same problem are probably from that other district,” Remster told me. “Incarcerated people are asking about the schools for their kids back home, worrying about housing affordability for their family.”

Conversely, if a family member has a concern about someone who is incarcerated, they would have to liaise with a representative outside of their district, who has less responsibility to address the concerns of non-constituents.

“In instances of abuse within the prisons, we would have our family members call the legislators in rural Pennsylvania where we were at and they would explain what was happening to us,” Holbrook explained. “Those legislators would say, ‘You’re not my constituents, where are you from?’ If they would say, ‘Philadelphia,’ the representative will say, ‘Well you should contact your state representative.’ This state representative who was benefiting from us being counted as his residents in his district, he is saying, ‘These are not my constituents.’”

But one of the biggest impacts of prison gerrymandering is its effect on shifting legislators’ political priorities on criminal justice issues. “The most direct impact [of prison gerrymandering] on criminal justice is that it blocks any sort of reform when legislators think that their reelection rests on keeping their own prisons full,” said Aleks Kajstura, legal director at the Prison Policy Initiative. And as a result of prison gerrymandering, the electoral power jailers and those living in the districts where they work have is inflated directly in proportion to the number of people they incarcerate, creating perverse incentives to continue mass incarceration.

“So, in states like New York, the Rockefeller drug laws were on the books for far longer than they had any popular support in the state,” Kajstura explained, “because the legislators in districts that were prison gerrymandered felt that their power rested in keeping the correctional facilities full and so they opposed any sort of common sense criminal justice reform.”

While the census could end prison gerrymandering by unilaterally deciding to count incarcerated people at their home addresses, it has declined making a change, leaving it up to states and local governments to redistribute internally after receiving census data. However, in the past, the census has made exceptions to the “usual residence rule” it uses to determine where someone should be counted for other populations, like military members and college students.

Illinois became the most recent state to limit prison gerrymandering, with the passage of the Pretrial Fairness Act in January, joining the nine other states who have ended the practice. The mechanism for counteracting prison gerrymandering requires reconciling census data, which counts incarcerated people as residents of prison districts and state Department of Corrections information on incarcerated people’s pre-incarcerated home addresses to individually reallocate people to their home districts. A bill introduced in Michigan by Senator Sylvia Santana would seek to use the same mechanism to end prison gerrymandering in Michigan, and Representative McClinton has also introduced legislation that would end the practice in Pennsylvania.

“What’s at stake is our democracy,” said Remster. “If you’re a person of color, given the way racial segregation works in this country, you’re affected even if you’ve never had contact with the criminal justice system in any way.”

Kiran Misra is a journalist covering the intersection of people and policy in places including D.C., Chicago, and Iowa.