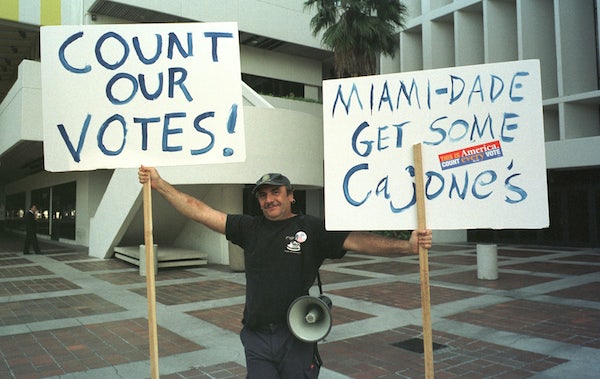 Trump threatens to use “law enforcement” because he is unhappy with Florida election results.

Trump was referring to the still unsettled elections in Florida, where both the gubernatorial and Senate race are so close that they are heading for a recount. In the gubernatorial race, Republican Ron DeSantis has 49.6 percent of the vote as against 49.2 percent for Democrat Andrew Gillum. In the Senate race, Republican Rick Scott has 50.1 percent of the vote against Democrat Bill Nelson, who has 49.1 percent. The Scott/Nelson race has been narrowing especially fast as counting continues in traditionally Democratic areas such as Broward County.

It’s unclear what “law enforcement” the president was referring to, since election laws are a state matter. As Josh Marshall of Talking Points Memo suggests, the goal might be to bolster Scott in the ongoing battle: