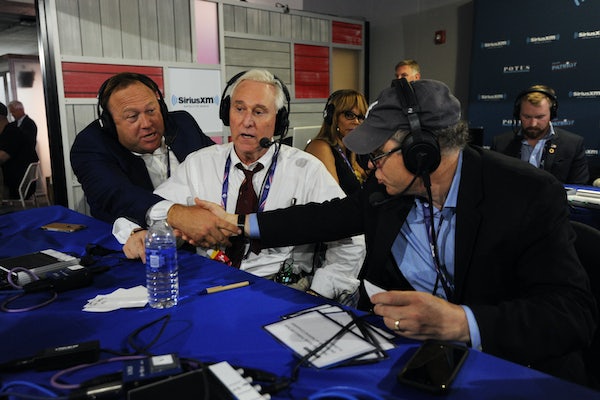 Among the social media giants, Twitter is the exception in its handling of Jones, a notorious conspiracy theorist who has argued on his show InfoWars that the Sandy Hook massacre was a false flag operation. Whereas YouTube, Facebook, Apple, and Spotify have all removed InfoWars content, Twitter has refused to act.

“We didn’t suspend Alex Jones or Infowars yesterday,” Dorsey tweeted on Tuesday. “We know that’s hard for many but the reason is simple: he hasn’t violated our rules. We’ll enforce if he does.”

A CNN investigation shows that Dorsey’s statement is factually false.

As the cable news network reports, “Content that appears to violate Twitter’s rules appears over and over again in the hundreds of hours of video available on the accounts that Jones and InfoWars maintain on Twitter and Periscope, a livestreaming video service that Twitter owns. Jones has repeatedly degraded individuals of the Muslim faith. He has attacked people on the basis of gender identity. And he has engaged in the harassment of individuals.”

Asked to respond by CNN, Twitter went through some bizarre contortions. “A spokesperson at the time said the company had no comment beyond a statement CEO Jack Dorsey made on Tuesday in which he said neither Jones or InfoWars had ‘violated our rules’ and other previous statements by the company,” CNN reports. “When asked if Twitter would be reviewing the videos and content CNN had asked about, the spokesperson declined to answer. On Thursday afternoon, after another request for comment, a different Twitter spokesperson notified CNN that the company was reviewing the content.”

Subsequently, the tweets with the offending content were removed from Twitter. The company denies it did so (likely Jones himself removed them).