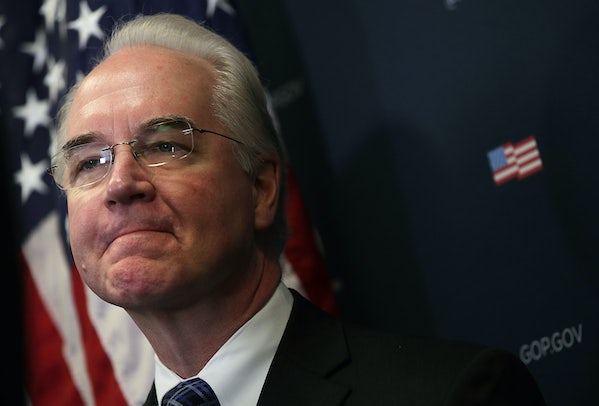 Tom Price was too corrupt and incompetent even for the Trump administration.

Price resigned on Friday afternoon, shortly after Donald Trump hinted that a decision to fire the Health and Human Services Secretary was imminent. Price’s time as secretary was brutish and short. It began with Price’s confirmation hearing, which uncovered evidence of possible insider trading while in Congress. For the next several months, Price tried repeatedly to push Congress to repeal and replace Obamacare, and failed repeatedly and spectacularly.

But Price was ultimately undone by the corruption that appears to have characterized his time as a public servant. In his short reign at Health and Human Services, Price spent over $1 million on private planes and military aircraft for himself and his family. When he finally admitted wrongdoing yesterday, he did so in the most weaselly way possible, refusing to fully own up and pay the entirety of the taxpayer money he had spent.

Price’s resignation is notable for two reasons. The first is that it’s the latest in a series of high-profile firings and resignations that have defined the Trump administration’s first eight months. In terms of significance it’s up there with Reince Priebus, Steve Bannon, and Mike Flynn (to say nothing of James Comey, Sean Spicer, the Mooch, Sally Yates... the list goes on and on). Taken in total, these resignations are all the evidence you need that this is a chaotic and incompetently run administration.

The second is that Price’s biggest crime seemed to be optics. Reporting over the last month has shown that nearly everyone in the Trump administration has been grifting in one way or another, just not at Price’s level. Price’s resignation is an attempt to nip this growing scandal in the bud, but the main point shouldn’t be lost. Lots of people in the Trump administration have used their position to grift from taxpayers in one way or another. Price may have been the biggest offender, but he’s also something of a scapegoat.