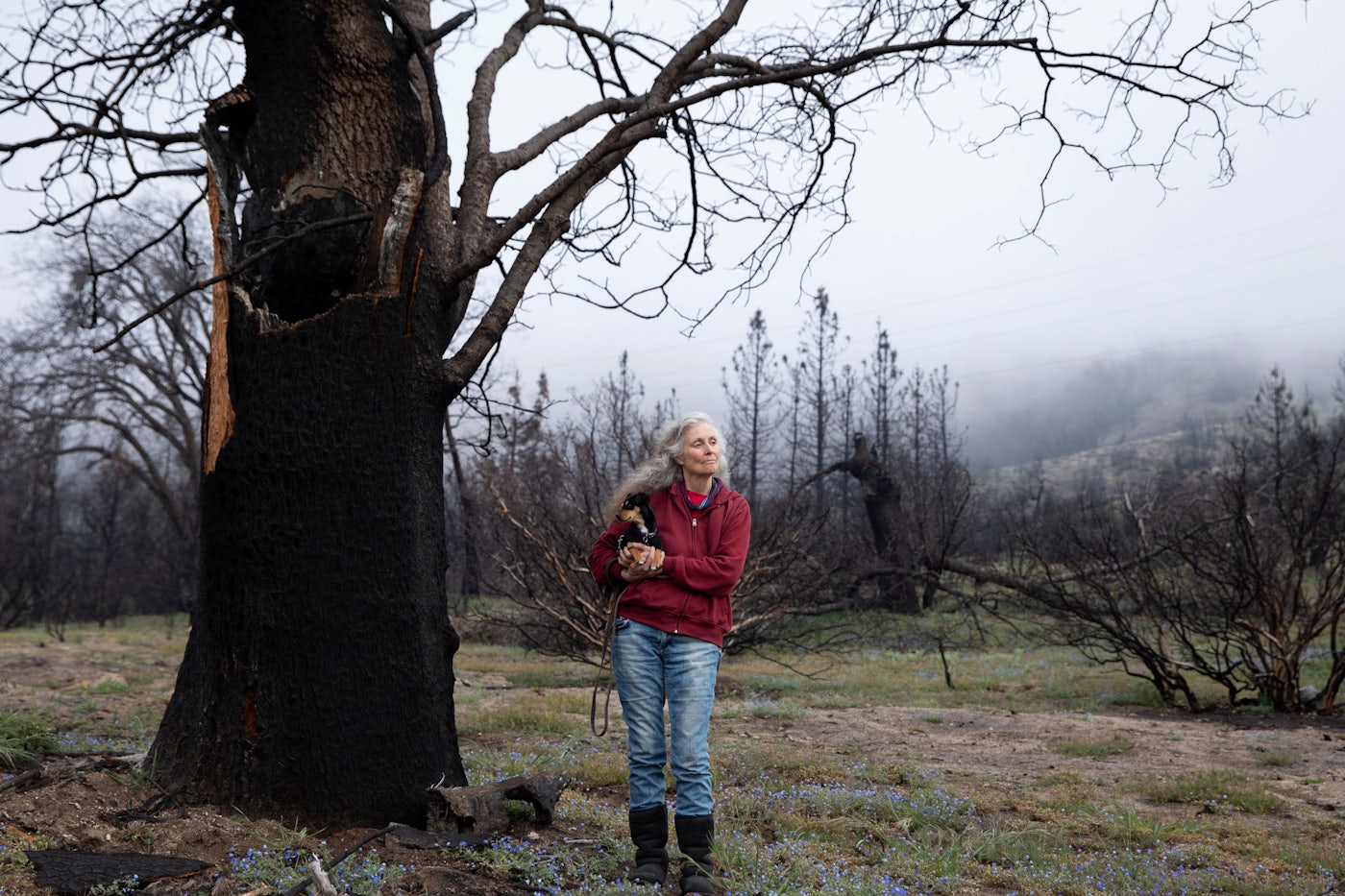 I’ve lived in Idyllwild for the last 45 years. It’s a small town in the Southern California mountains, and it’s about a mile high where most people live. We don’t have any traffic lights. We don’t have fast food. We don’t even have a Starbucks. But we have many, many hiking trails. The Pacific Crest Trail passes through here on our ridge. People come from all over to visit us, because they like to get away from the city. Back when I had my art gallery, people would come in and say they were just so happy to be here in these natural surroundings.

This past July, the town had to evacuate the mountain because of a wildfire. We’ve been through fires before, but nothing as bad as this. It started because of an arson, and because everything was so dry, it really took off. We also had high winds at that time—the Santa Ana winds—which we normally get more toward September or October. But here we were, at the end of July, having these winds that just pushed the fire all over the mountain.

When I learned that I had to evacuate, I was dog sitting for a fella. I got a call from my landlord that said the fire was about three miles away. So I put the dog in the car and we went down the hill. We met up with the fella, and the three of us stayed in a hotel.

It was just total stress and anxiety. Sometimes we would look out the window and see the smoke and ashes rising from the hill. I didn’t have my computer or my cell phone, and I didn’t have my medication. I also have three chickens, and I was worried sick about my chickens. One, I call her Ari—she’s an Araucana chicken. One I call Smiley, because it just seems like she’s always smiling. The other one I just call Pretty, because she’s pretty. I couldn’t get in touch with anybody to take care of them.

Fortunately, the fella I was with works for the local newspaper. So he managed to get himself back up the hill to get my computer and medications. When I had my computer, I put a request out on Facebook to see if anyone was still up there. Another fella I don’t even know responded. He fed and watered my chickens, and made sure they were safe. And when I got back, the first thing I did was run back to see the chickens. They were fine. That’s typical of this town, that a perfect stranger would stand up and help.

The fire didn’t get to my house. But I can walk a block from here and see where the firefighters stopped it. These amazing firefighters, they stopped the fire from getting into town. If they hadn’t, I might not be talking to you right now.

So after a while, they were able to open up the roads, and people were able to come and go again. I’ve been coming up here since I was a kid, so I’ve seen these pine trees my entire life. The first time we were allowed back after the fire, I saw that all these trees that I had grown up with had either turned black, or were gone. I was just destroyed. I had to pull over and weep.

But when I came back, the chickens came running after the fence. And that was so nice to see them, that they were OK, and that they had the energy to come out and greet me. You know chickens, I think they have a short memory.

After that, we started having kind of a normal winter, with lots of snow pack up in the high country. Then, on Valentine’s Day this year, we had something called an “atmospheric river”—which I had never heard of. Turns out we’d never had one up here before. And I’ve seen heavy rain, but this atmospheric river dumped, I don’t know how much. But a lot of rain real fast, all at once, and melted the snow.

There’s three roads that go up to the hill. Because of flooding and mudslides, all three of them were blocked. So here we were, an island. There was no way to get supplies. No way to get medication. No way to get propane deliveries for heat. People who work on and off the hill couldn’t go to their jobs. The whole town was impacted, especially the businesses and restaurants who depend on the tourism.

I’m lucky because I’m retired, I didn’t have anywhere I had to go. But I live in a converted two-car garage, and I actually ran out of propane when it was really, really cold. I also get my medication through the mail, so I got freaked out that the mail wasn’t going to come up. Fortunately, one road eventually opened up, and I was eventually able to get both.

We got a lot of news coverage for both events. The stations from Los Angeles came up, and showed the town and the damage. But they never told people that it was okay to come back up here again. They didn’t follow up. So people are just now finding out that we are indeed still here—that we didn’t burn down, and we didn’t wash completely away.

The main trouble now is that the two routes that come up to the hill are still closed because of the mudslides. So we’re not getting a lot of people we used to, because they would have to drive an hour longer to get here. The town depends on tourism to survive. The locals, we can’t keep all the shops and restaurants thriving by ourselves.

I know things like this will keep happening. I’ve read about the effects of climate change all over the world. But to go to a new place, and have to get to know all the new people? I’m 71 now. I’m too old to make a big change like that.

And I think wherever you go, there’s going to be some kind of a weather issue. If not now, maybe later. I feel so bad for people in the Midwest and on the East Coast, they’re having one problem after another. I’m fortunate. I’m retired, I’m safe.

So I’ll stay here. This is where my heart and soul lives. If something happens to Idyllwild, it happens to me.

Kristy Frazier is a writer based in Idyllwild, California.

Emily Atkin is a contributing editor to The New Republic and the author of the climate newsletter Heated.